Technically necessary cookies are set on this page for the provision of our offers. By clicking on "OK" you also agree that we will record and evaluate your stay on our website. These records and evaluations are used exclusively for the analysis, maintenance and improvement of our website. In this case, we also pass this information on to our partners for social media (Facebook pixels), advertising and analysis (Google). More information as well as instructions on how to disable individual analysis functions can be found in our Privacy Policy.

After the 20th century, that was considered the century of Electronics, the 21st century is the century of Photonics. In 1960, Theodore Maimam built the first apparatus using the principle of "Llight Amplification by Simulated Emission of Radiation". A principle that allows light to be generated with power debsities billions of times higher than the highest conventionally produced power or energy densities. Since than, the LASER has had an Characteristics of Optical Radiation unprecedented success story in technology.

After the 20th century, that was considered the century of Electronics, the 21st century is the century of Photonics. In 1960, Theodore Maimam built the first apparatus using the principle of "Llight Amplification by Simulated Emission of Radiation". A principle that allows light to be generated with power debsities billions of times higher than the highest conventionally produced power or energy densities. Since than, the LASER has had an Characteristics of Optical Radiation unprecedented success story in technology. 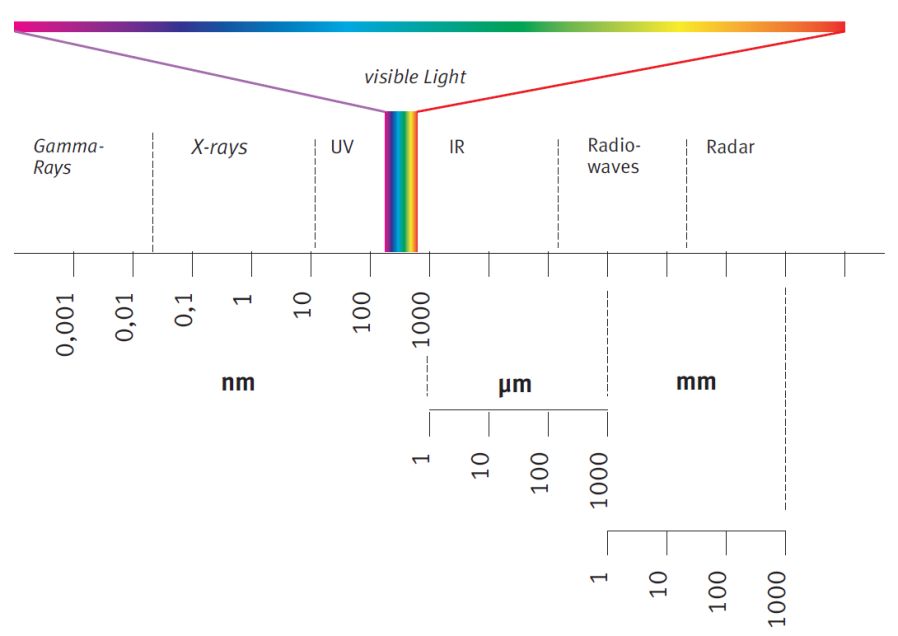 In this general sense light consists of electromagnetic radiation in the wavelength range between 380 and 780 nm (nm = nanometer = one billionth of a meter). This range is designated as the visible spectrum. When all wavelengths in the visible spectrum are emitted simultaneously, this is perceived as white light. When white light falls on an optically dispersive element such as a prism or birefringent filter the colours of the spectrum can be seen due to refraction. It starts at the short wave as the colour violet, turning to blue, green, than yellow and goes to the long wave, which appears as red. Beyond the long wave (red) of the spectrum is the near and far infrared range. Below the shortwave range (blue) is the ultraviolet range.

But the term Laser-‘light’ refers to a much broader range of the electromagnetic spectrum: between 150 nm up to 11000 nm, i.e. from UV-‘light’ up to far infrared ‘light.’

Function principle of a laser

A Lasers consist mainly of the following parts:

To start the laser activity the atoms of the laser medium have to be stimulated by the pumping process. The electrons of the atoms are elevated to energetically higher levels. Falling back to a lower level they emit their energy in form of a photon which is the smallest energy quantum of electromagnetic radiation. These photons in turn stimulate other atoms. The amount of light is being continually increased in intensity as it oscillates back and forth be-tween the mirrors, creating an avalanche effect. A certain part of the photons pass through the partially reflecting/partially transmitting mirror and forms the laser beam.

Lasers differ not only with respect to wavelength or optical power from each other, but also in the way how the power is emitted. It is a relevant difference, if the power is emitted continuously (continuous wave operation - cw) or in form of pulses (long pulse, giant pulse / q-switched or mode-locked). In case of pulsed operation with low pulse repetition rate the peak power of each single pulse is the critical value. If the repetition rate inceases, the avarage power needs to be taken more and more into consideration. Please note, that some lasers can be operated in different modes.

Lasers have been categorized into 4 hazard classes based on the accessible emission limits or AELs. These limits indicate the class of the laser and are listed in EN 60825-1 and the American National Standards ANSI Z136.1 for Safe Use of Lasers. The AEL values for the laser classes are derived from the medical MPE (Maximum permissible exposure) values. The MPE values specify the danger level for the eye or the skin with respect to laser radiation. Since 2007 the laser classes are defined as listed below.

In order to be able to classify laser devices regarding to their hazard, they are divided into so-called laser classes. This classification is based on the so-called GZS values (GZS: limit values for accessible radiation; English AEL: Accessible emission limit).