Technically necessary cookies are set on this page for the provision of our offers. By clicking on "OK" you also agree that we will record and evaluate your stay on our website. These records and evaluations are used exclusively for the analysis, maintenance and improvement of our website. In this case, we also pass this information on to our partners for social media (Facebook pixels), advertising and analysis (Google). More information as well as instructions on how to disable individual analysis functions can be found in our Privacy Policy.

At the area of application of the European laser safety standards laser safety glasses are ment to be lables as personal protective equipment (PPE) acc. to the standard EN 207 and/or EN 208. The marking acc. EN 207 must include the wavelength-/area, the operating mode (D, I, R or M), the protection level (LB-value), the CE-sign and the marking of manufacturer. A simple marking of the optical density acc. the American ANSI-standard is prohibited. 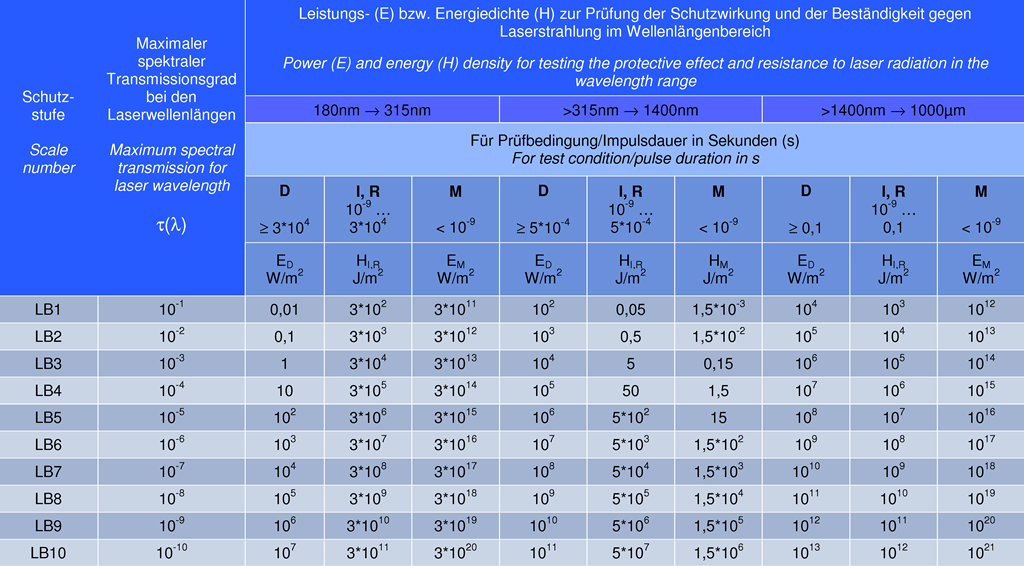 Furthermore an EC-type examination made from an independent verifier is necessary, according the European laser protection standards for personal protective equipment (PPE) to receive the CE-certification for a “laser safety glass”. Herewith not only the density (OD) but also a number of different parameters, like the UV-stability and the covering area are tested and weighted. Necessary for the classification of protection levels are, however, to identify the injury level and the endurance. These are located through viewing and/or testing of the max. energy- and power density affecting the filter (energy and/or power per beam area) without hitting the threshold value at the backside (eyeside) of the filter.

Within the scope of the CE-admission, a laser safety glasses (frame and filter), which is made by an independent verifier (notified body), a protection level is issued. This protection level must indicate the minimum optical density of a standard laser strain (wavelength, power and the operating mode). A CE-marked laser safety glass guaranties for an endurance of a standardized laser hit of min. 5 sec. or 50 pulses of the energy- or power density acc. the issued protection level. For a determination of the injury level laser safety products are subjected to a real laser endurance testing supervised by an independent verifier. The following basic rules are denoted as standards. Due to the use of the Equipment- and product Safety Act, dated November, 8th, 2011 and its connected implementation of the European PPE-Regulation 2016/425 this basic rules become a statutory provision, which also is enforceable at the court. Not only within the accident prevention regulations but also within the Medical Equipment Regulations it is named.

Within the DIN EN 60825-1, in addition to the laser protection ratings, also the medical threshold values (MZB-values) for the human eyes and skin are defined. These values inform about the maximum power- and energy density values which a user can and is allowed expose riskless. According to this base the necessary filter effects can be determined.

In order to achieve a certification according to EN 207 and to receive the CE-mark laser eye protection products require direct hit testing. The safety eyewear (filter and frame) must have to withstand under standardized conditions a direct hit from the laser for which they have been selected for at least 5 seconds (cw) or 50 pulses (pulsed mode). Behind the glasses the critical values of laser class 1 may not be exceeded. In countries which follow the European standard for personal protection it is not acceptable to select laser glasses according to Optical Density alone.

For the reason it is not possible to find a fitting filter for a set of parameters of the laser (wavelength, power or energy, repetition rate and diameter) which meet all requirements acc. DIN EN 207 or DIN EN 208 it is possible to choose a filter acc. a risk assessment which meets the requirements at the closest. This means that at least the optical density must be sufficient to meet the basic norm EN 60825-1. An authorized and certified filter ensures the test time of 5 sec. i.e. 50 pulses which is required from the standard. Up to the stated protection rates only!

For this kind of exceptional cases it is recommended, that the laser safety officer or safety engineer  contacts the responsible Employer’s Liability Insurance Association in order to discuss the application in detail.

This norm refers to glasses for laser alignment. They will reduce the actual incident power to the power of a class II laser (< 1mW for continuous wave lasers). Lasers denoted as class II are regarded as eye safe if the blink reflex is working normally. Alignment glasses allow the user to see the beam spot while aligning the laser.
Alignment glasses must also withstand a direct hit from the specified laser for at least 5 seconds (cw) or 50 pulses (pulsed mode) under standardized conditions.

ANSI Z136 standard requires specification according to optical densities (OD) only. The Optical Density (OD or D (λ)) is the attenuation of light that passes through an optical filter. The higher the OD value, the higher the attenuation. The mathematic expression of Optical Density (Dλ) is the logarithm to the base ten of the reciprocal of the transmittance and is given by the listed equation (where τλ is the transmittance).

ANSI also allows a definition of a Nominal Hazard Zone (NHZ) which can be determined by the laser safety officer (LSO). Outside of the NHZ (nominal Hazard Zone), regarding the standards, the eyewear is adequate against stray light.